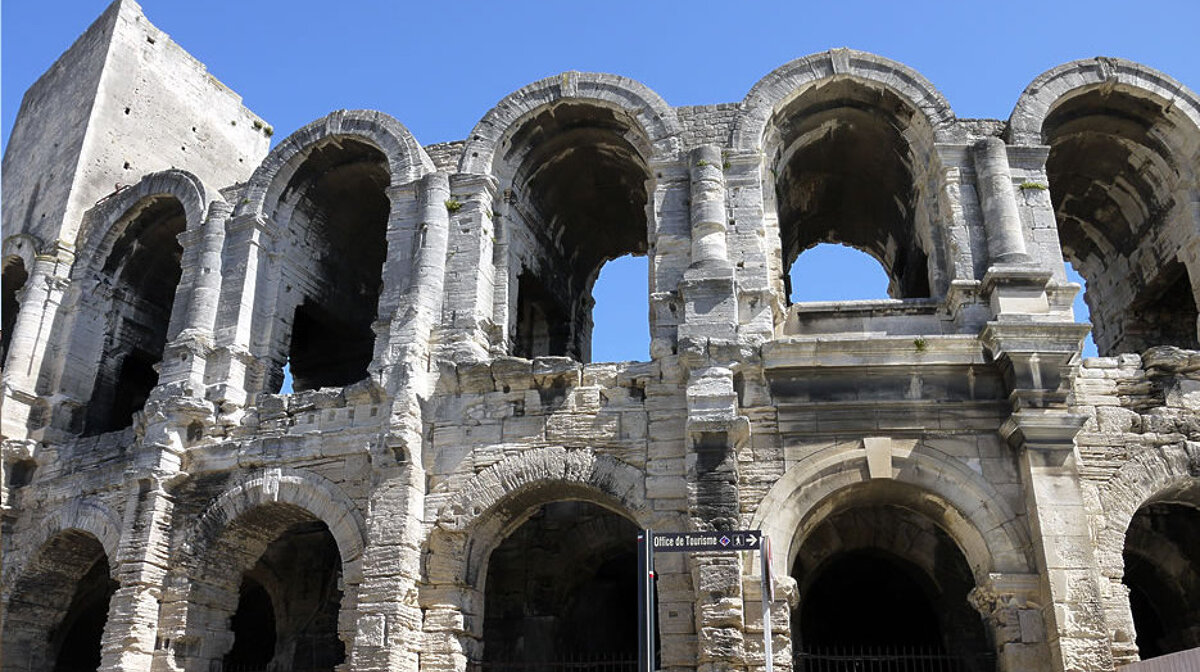 Discover the Provence of yesterday

It is not surprising that the south of France has a long and varied history. A rich, fertile land that borders the sea and is on the land trade route between Italy and Spain, it has been invaded and fought over since before Roman times.

The Greeks were the first on the scene, and it was they who first cultivated olives and vines in the 5th century BC on the lands surrounding their base in Marseille. When the Romans arrived at the end of the 2nd century BC, they chose Aix-en-Provence (Aquae Sextiae) to be their home from home. They introduced amphitheatres, baths, temples and aqueducts – not only in Aix but in their other strongholds of Arles, Nimes, Orange and Glanum (near St Remy). Frejus became their port of choice and was a naval base for marine conquests throughout the Mediterranean.

As the Roman Empire began to decline in the 5th century AD, a new wave of interlopers arrived – the Christians. Many abbeys were constructed and the ruling bishops saw to the continued cultivation of the land. The Germanic tribes (the Visgoths, the Ostrogoths & the Franks) attempted to take advantage of the vacuum left behind by the Romans, and were joined by Arab invaders and North African pirates who were having a field day throughout the Mediterranean. Add to this, the tussles between the Counts of Burgundy, Barcelona and the local Counts of Provence, meant that Provence was a pretty hazardous place to be from the 9th to the 13th centuries. Despite this, some fantastic architecture was built during these times. The wonderful Cistercian abbeys of Thoronet, Senanque and Silvacane were constructed in the 12th century, with the large gothic structure of the Basilique St Maximin la St Baume coming later during the 13th century.

Development through the ages

During the 14th century, the Roman Catholic Papacy moved from Rome to Avignon. A conflict between Pope Boniface III and King Philip IV of France resulted in conflict in Rome and when Boniface died, he was succeeded by French Pope Clement V. He established his court in Avignon rather than Rome in 1309, and the Papacy was to remain in Avignon for the next 70 odd years. The arrival of the Papacy to Avignon brought intellectuals and artists to the city, resulting in the creation of a civilised and wealthy city.

The Counts of Provence rule passed to the Anjou Princes (by marriage) who then ruled until 1481 when the line died out. Provence was incorporated into France at this time, under the rule of King Louis XI, but had some autonomy and a parliament of it’s own in Aix. The 16th century saw Provence become embroiled in the Wars of Religion. Extremes of Catholicism and Protestantism battled for dominance – many villages in the Luberon were destroyed because of the religion of their inhabitants. The Protestant town of Orange was the site of gruesome bloodbaths, as was the Catholic town of Nimes. The wars were halted in 1593 when the edict of Nantes was issued, guaranteeing the rights of Protestants. The cessation of fighting allowed Provence to prosper. The ports at Toulon and Marseille became wealthy from ship building and commerce, and the rural countryside produced olives, wine, pottery and perfume.

This prosperous time came to an end in 1789 when the French Revolution erupted. The monarchy was deposed, hierarchy and privilege were attacked by republican ideals, and secularisation replaced religion. Royalists and religious figures were massacred, lavish buildings were destroyed and chaos ruled for 10 years. The Declaration of the Rights of Man & of the Citizen was written and adopted during this time. The Revolution came to an end when Napoleon Bonaparte became First Consul in 1799, and then Emperor in 1804. There was a brief respite for the monarchy when the descendants of Louis VII were placed in power from 1814 to 1848, after which Louis Napolean (nephew of Bonaparte) was elected President. Stability returned to Provence at the same time as the Industial Revolution, resulting in the spread of transport networks that allowed trade to flourish and the creation of wealth.

An agreement between Napoleon and the prime minister of Piedmont in 1859 saw Nice, Roquebrune Cap Martin & Menton join France and the creation of a united Italy. At a similar time, the French Riviera was gaining popularity amongst the rich and famous, and these coastal towns enjoyed a tourism-related economic boom. Inland, restoration of some of Provence’s finest ancient monuments began, along with excavation of Roman ruins.

The Riviera is born and nearly destroyed in the World Wars, particularly World War II, where Provence was occupied first by Italian troops in the east, and then by the German army in 1942. The naval harbours of Marseille and Toulon were heavily bombed, and internment camps were set up – the main one being at Les Milles near Aix. In 1944 the Allied forces landed on the Var coastline between St Raphael and Cavalaire sur Mer; the occupation was over two weeks later.   After the war, the rebuilding began, and the need for accommodation sadly saw the construction of some of the concrete monstrosities that you see around the coastline today.

The TGV high speed train line has ensured that tourism plays a major part in the economic fortunes of Provence. It is estimated that 34 million tourists visit Provence each year, providing 12% of the regions GDP. Provence has also been the region of choice for many industries such as telecommunications, microelectronics, biotechnology, aeronautics and marine technology, multimedia, logistics and chemicals. Local produce (agriculture, wine, textiles, ceramics) also contribute to the economy.