For information on individual itineraries and bike parks, see our mountain biking routes.

The diverse landscapes of the Provence region ensure that every ride will be a memorable experience with stunning views, possibly some lung-busting technical ascents, lots of wooded and open rocky single track, downhill specific tracks with tricky descents, cross country way-marked loops and a bit of lift access for those not keen on pedalling uphill.

Provence's geographical location and fantastic climate allows for biking all year round. The dry trails and winter sun ensure that it is the place to head if you aren't drawn to the snow and mountains but prefer to continue mountain biking when everyone else hits the slopes!.

There are several 'Grandes Traversees' for those who want to take on the challenge of one of these greulling week long itineraries - the Trans Verdon, a mere 260km of beautiful but technical riding, or the Trans Provence which goes from Sisteron to Menton and has been turned into an endurance race each year in late September.

Provence can certainly be technically challenging with such varied terrain, from sweeping single track to limestone rocks and dust, wooded rooty areas to steep mountains and seriously scary ridges, some of the trails are definitely not for the faint hearted.

If you're looking for an easy level of riding, there are plenty of low level cross country trails and graded trails through small villages that have been checked and way-marked by the FFC (Federation Francaise de Cyclisme). Most routes can easily be follow on a map, or with the multitude of signs along the trails.

We have compiled a list of some of the more popular cycling routes in Provence. We have concentrated on routes that are suitable for everyone, rather than hard core cyclists. As Provence has mountainous and flat terrain, you can choose your route to suit your purpose - we promise you that there is something for everyone!

If you don’t own your own mountain bike and plan on renting equipment then there are plenty of Provence mountain bike hire shops hiring out both full suspension and hard tail mountain bikes. The cost of daily rental varies from store to store and on the type of bike you choose to rent. On average you can pay anywhere between €16 - €80 euros for a days hire. Prices vary depending on whether you select a basic bike without suspension, or a full on free ride descent bike. (It is also possible to hire mountain bikes for children from around €15 a day.)

If you bring your own bike then there's no point loading up your excess baggage with spare bike parts either (unless your bike requires specific specialist component parts). Provence has some excellent biking shops that sell plenty of spare parts and components for your bike. However, remember the spares list does not extend to some obscure pivot in your one off special downhill rig. We are talking rear mechs, pedals, cranks, chains, cassettes, brakes, brake pads, cables etc from the more popular manufacturers.

The exception to this rule is the rear gear hanger; bring one with you for your bike, especially if it’s of the super funky alternative/rare type. The bike shops do not carry this part for all the different bike manufacturers and the models they make and it is probable the most frequently damaged part in the event of a crash. Even a relatively innocuous fall can damage this part and although they can often be bent back into shape, it would be a shame to ruin your holiday if this were not the case. (Most of the rental shops will also do a good line in helmets, body protectors, repairs and servicing.)

Flying with your bike

A review of airlines terms and conditions in relation to sports equipment baggage indicates that it is highly likely that you will be subjected to a standard charge for taking your bike on board. Easyjet; bmibaby; Aer Lingus; and KLM indicated that there was an average additional charge of between £15 (€22.50) and £25 (€36) to take your bike, one-way.

However, make sure that the combined weight of your luggage does not exceed you allowance. Although you may have paid an excess for your bike its weight may be added to the weight of your hold luggage and there can be a penalty for any kg's over the allowance.

The more conventional airlines such as British Airways and its code share partner Swiss airlines permit free transport of bikes providing they fit within the free baggage allowance, and are packed in a hard shelled container.

Packing your bike for a flight

There are a few options available in transporting your bike. Hard bike boxes tend to cost in the region of £300 and like a hard case suitcase it will minimise the risk of damage occurring to the your bike but they are heavier. A soft bike bag is the cheaper option, costing around £100. Whilst this will provide your bike with a little more padded protection it is not as reliable as the hard box. On our recent trip from the UK to Geneva, we transported our bike in its original cardboard box, protected the key areas with bubble wrap and cardboard and it arrived safely and undamaged. Most airlines stipulate the following:

If you are transporting your bike, you should also check out your travel insurance arrangements. A lot of travel insurance companies will not cover your expensive mountain bike without an additional excess payment, and a lot of airlines will not be held responsible for any damage sustained whilst the bike is in their care. Check out your household insurance policy to see whether it can be covered as 'contents away from home'. There may be a slight surcharge for this option, but it's potentially better than having to fork out for a new bit of kit, or a brand new bike!!

In addition to bubble wrap, purchase some pipe lagging and zip ties from a DIY store to put around the frame of the bike for protection during transportation. In addition, if you don't have your original cardboard bike box, ask your local bike shop for one. If you have the choice always use the manufacturer’s box and your bike should arrive safe and whole. However, it is worth noting that the most frequently damaged part of a bike is the rear gear hanger. Remove the rear gear mechanism and tie wrap loosely to the frame to avoid this scenario. This applies almost equally to disc brake rotors if your bike sports them. Take them off, likewise pedals, its only a five minute job and will prevent you engaging in a fruitless search for an obscure part in resort.

Taking your bike on the train

Going on holiday to France with your bike is pretty straight forward, but as with a lot of things, its better to book in advance.

The Eurostar allows you to take your bike in 1 of 3 ways into Europe.

2) Fold it up - If your bike is placed in a suitable bike bag no longer than 85cm, you can carry it on board as part of your baggage allowance.

3) Use the registered baggage service on the day of departure - For fully assembled bikes or bike bags over 120cm at their longest, you can use their registered baggage service for only €29 one way from Paris, €25 from Brussels and £25 from London. They will do everything they can to ensure your bike travels on the same train as you. But if it can’t, they guarantee that you will be able to collect it at your Eurostar destination station within 24 hours of your departure. If you can fold or dismantle your bike and place it in a bike bag between 85cm and 120cm at its longest, then you can use their turn-up-and-go registered luggage service for just €15 from Paris or Brussels and £10 from London. Your bike will generally travel on the same train as you unless there is not enough space. If this is the case, they will send it on the next available train.

On trains running from London to Avignon, Provence and the French Alps, bike bags measuring between 85 and 120cm can be carried on board as part of a passenger’s baggage allowance.

Once you're in France getting around with your bike can be straight forward, but again planning ahead and getting to the station early are highly recommended.

Domestic or regional trains (TER) and Tourist trains quite often allow you to transport your bike for free, although you may have to put it in a bike compartment, or hang it from a hook to save space, or fold it up and take it on as hand luggage. Spaces are limited and you cannot reserve in advance, and in some regions bikes aren't permitted Monday-Friday during working hours as the trains are too busy with pedestrians.

Regional trains in Ile-de-France, the region surrounding Paris, are called Transilien. These are the country’s busiest commuter trains. They operate into all of Paris’ stations and run on lines with a letter associated (line K, line P, etc.). They also include the RER trains, which run on lines A to E. You can take your bike on board a Transilien Monday to Friday, before 6.30am, between 9.30am and 4.30pm, then after 7.30pm; At any time on weekends and bank holidays and at any time if it is folded or placed in a bike bag and does not cause fellow passengers any inconvenience.

On Intercity trains it's best if you can dismantle your bike and carry it on in a bag no more than 120x90cm. Some of these trains require a seat reservation, whereas others do not. Consequently, according to the type of train, it may or may not be necessary to book, or pay for, a place for your bike.

Currently the walker/rider relationship is generally amenable. To keep it this way slow down for walkers and pass in single file to one side. A ring of a bike bell is more conducive to alerting walkers to your approach and getting them to step to one side of the trail whilst you pass on the other than an intrusive shout! A friendly “bonne journée” as you pass usually goes down well too.

Some trails are marked ‘piétons’ meaning walkers only; please comply, you wouldn’t be too happy to meet a walker half way down your favourite downhill course! It would be a shame if the restrictions were to be introduced in Provence.

The following 6 mountain biking rules were introduced by the International Mountain Biking Association, and should be understood and followed by every mountain biker before venturing out on the Provence trails. 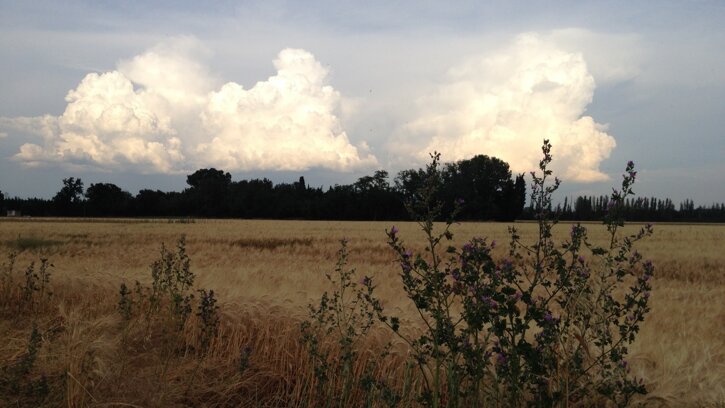 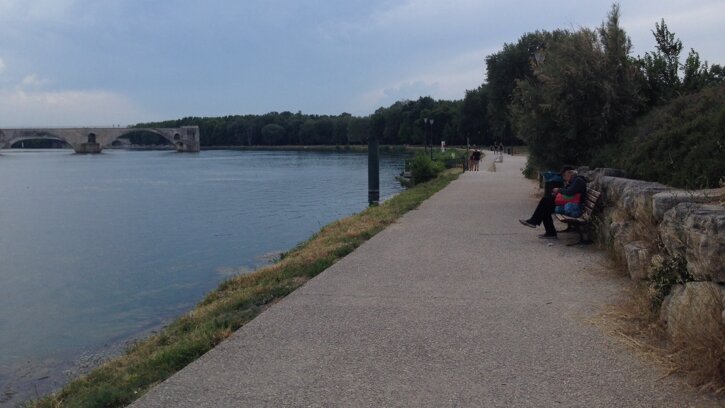 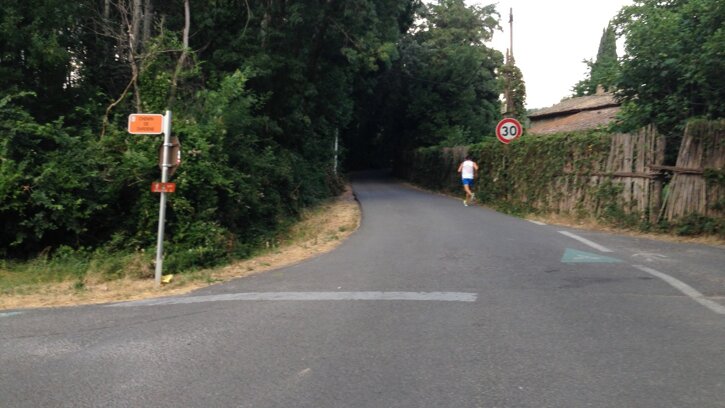 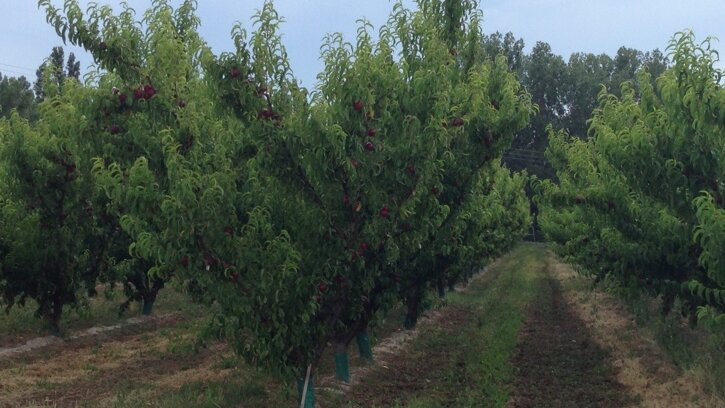 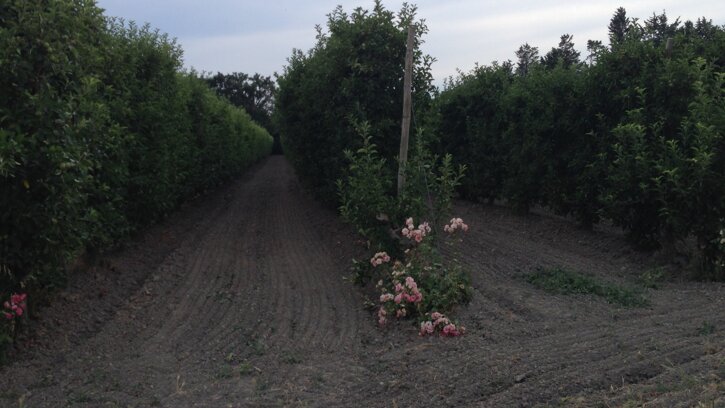 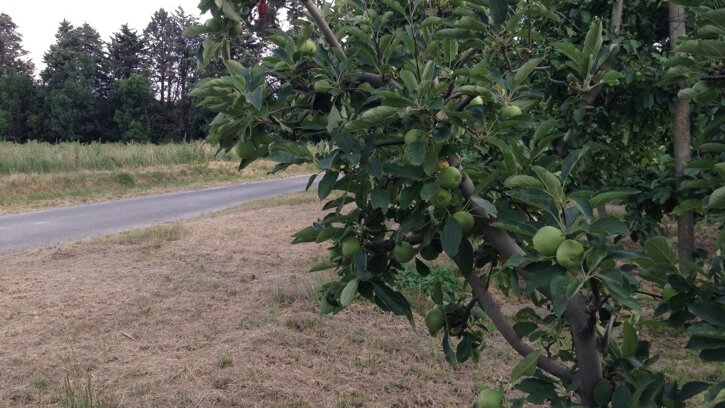 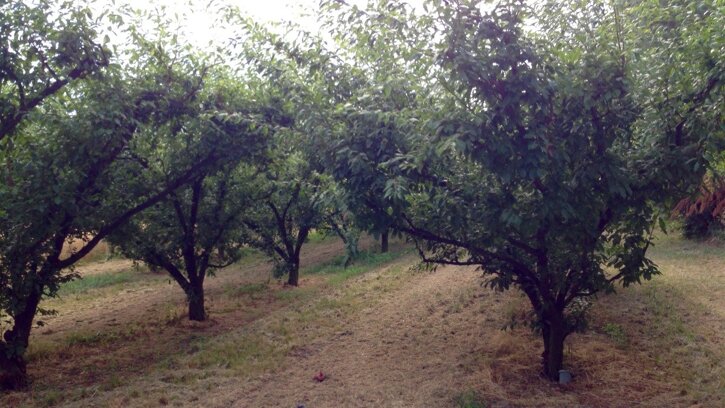 The island across from Avignon has a lot to offer

Interested in a lovely Provençal bike ride? Don't feel like going through the pain of climbing Mont Ventoux? That's OK! A perfectly peaceful bike route is waiting for you just across the river from Avignon. A spin around Île de la... 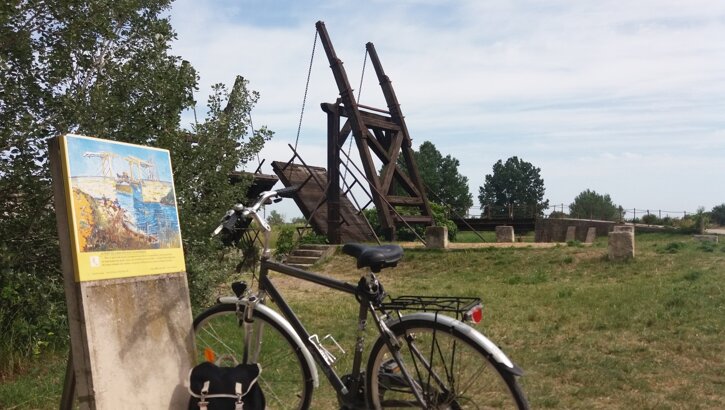 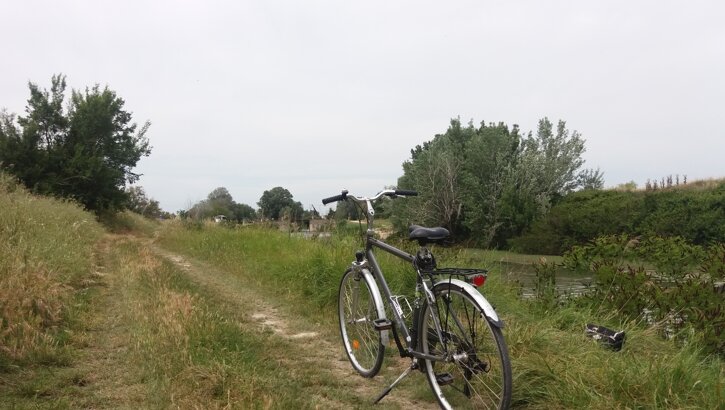 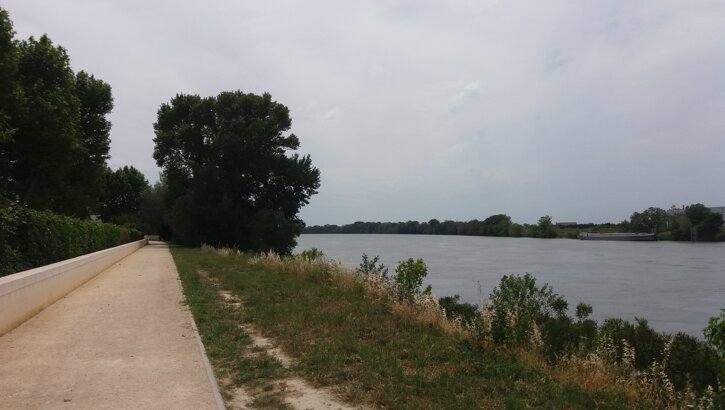 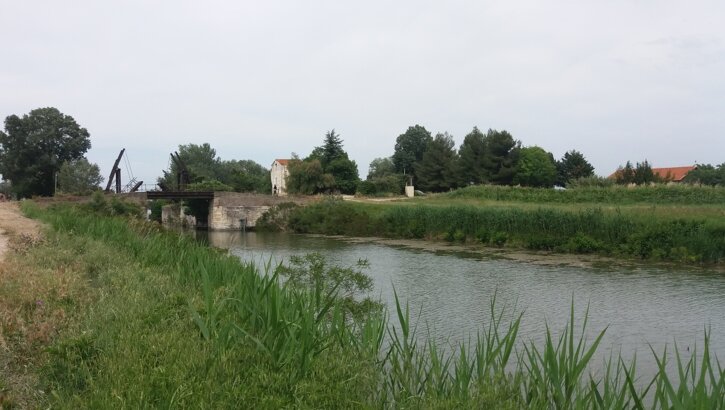 A gentle ride along signposted route by the river Rhone

Take a gentle bike ride through Arles along the Rhône River to visit the subject of one of Van Gogh’s famous paintings. 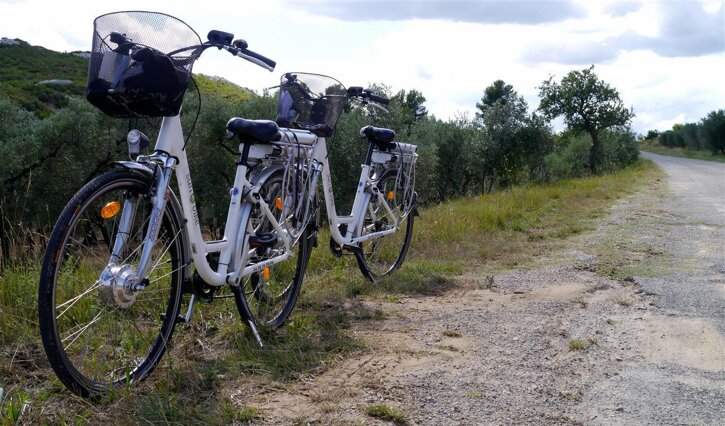 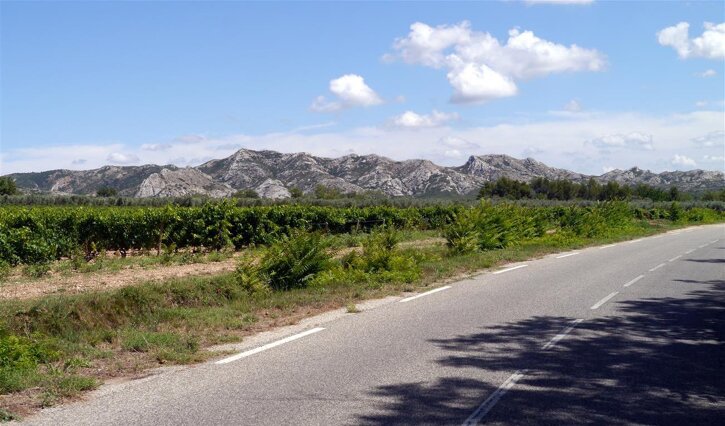 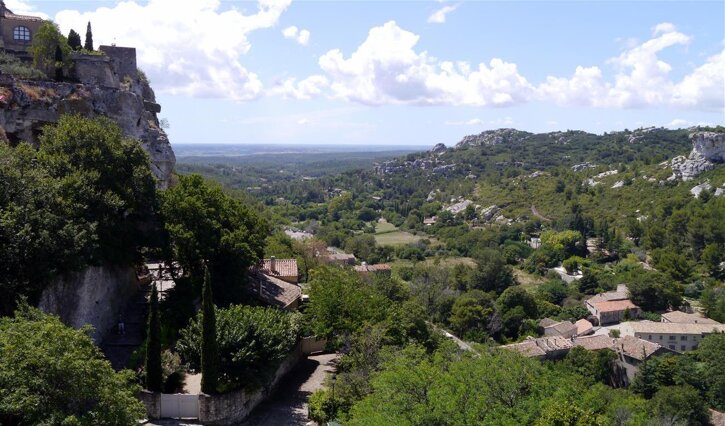 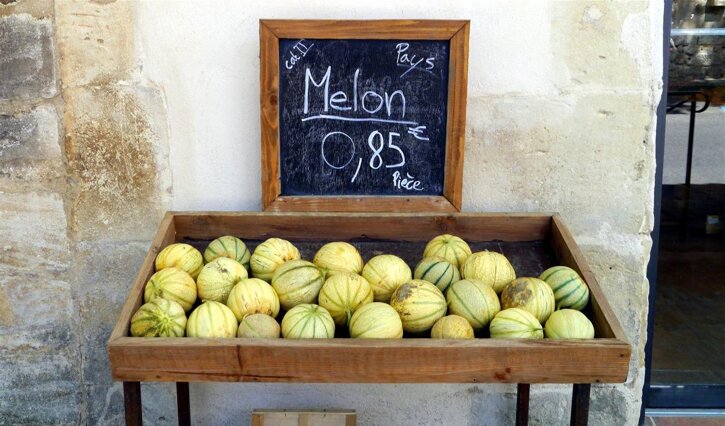 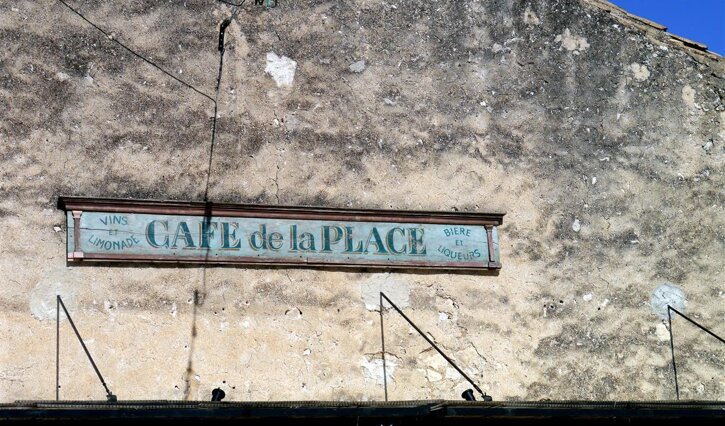 As we have already revealed galloping along the Alpilles on horseback is a jolly good way of touring the stunning scenery that this Parc Naturel has to offer, but for a more modern (lazy) approach there is an alternative - the electric bike. 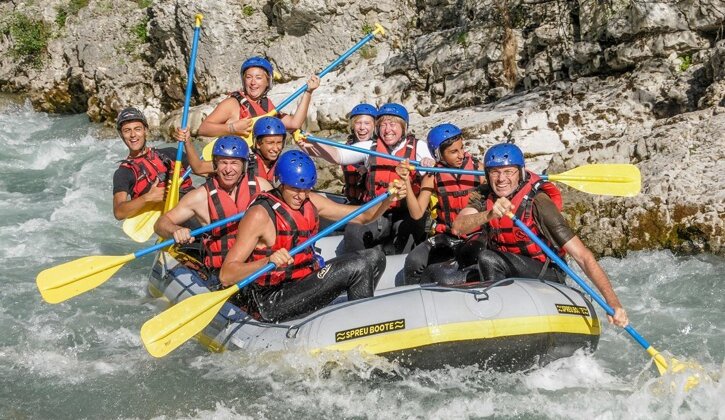 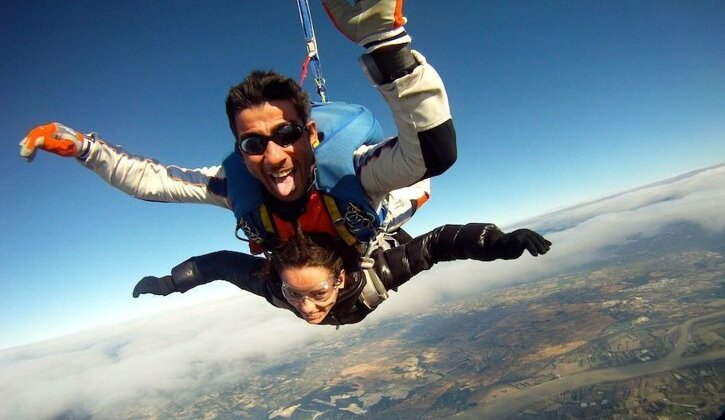 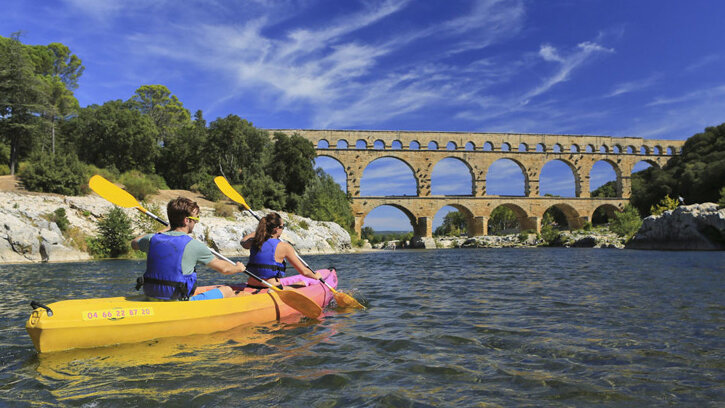 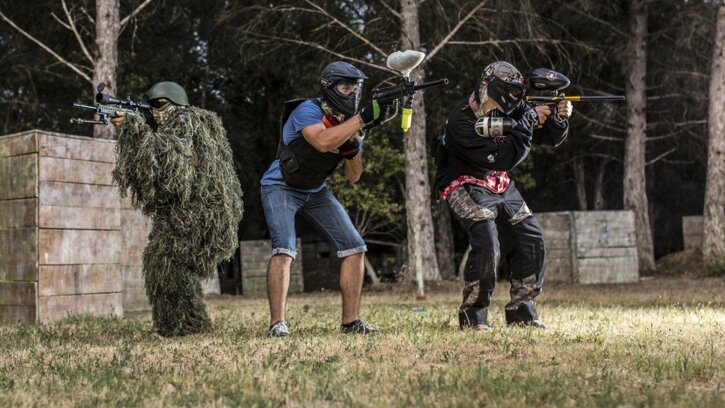 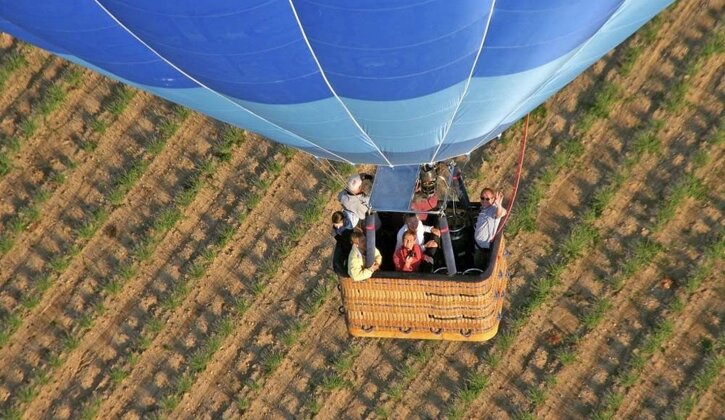 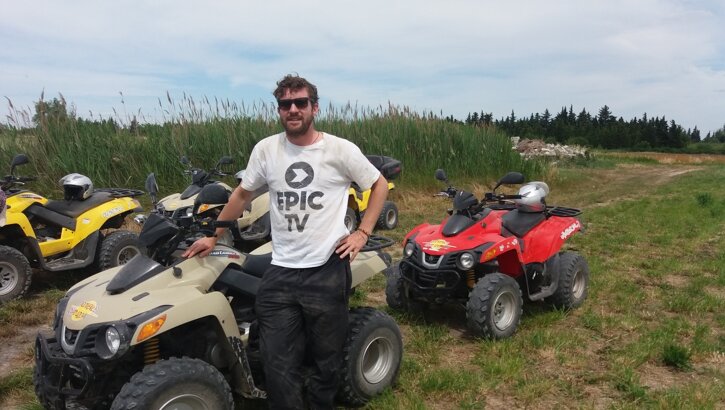 Flying, jumping, rafting, kitesurfing.. Provence has it all

Coming on holiday to Provence doesn't necessarily have to mean that you have to step down a gear and enjoy life at a slower pace of life, although there's absolutely nothing wrong with that. 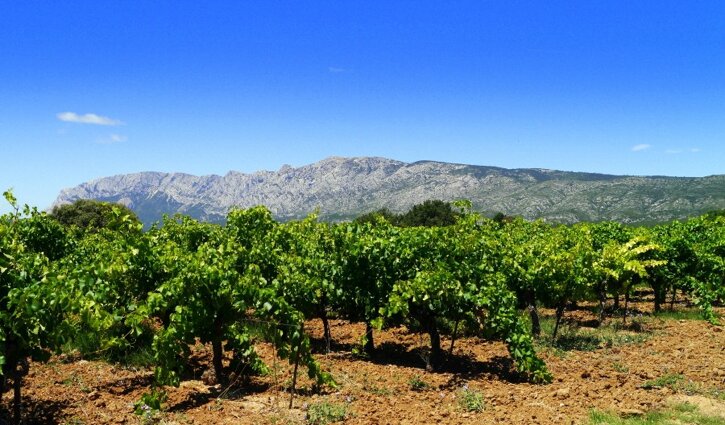 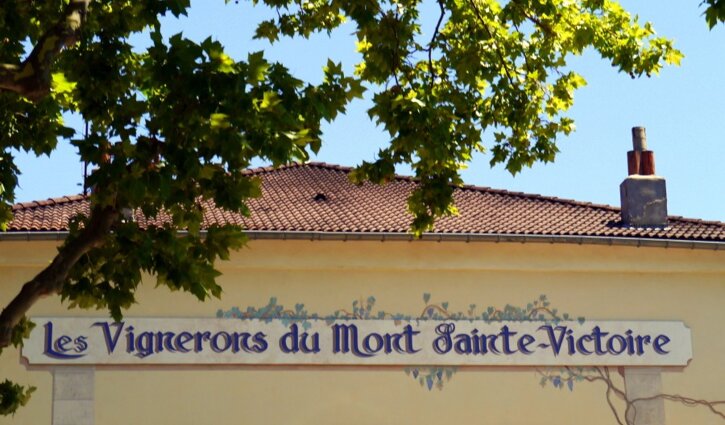 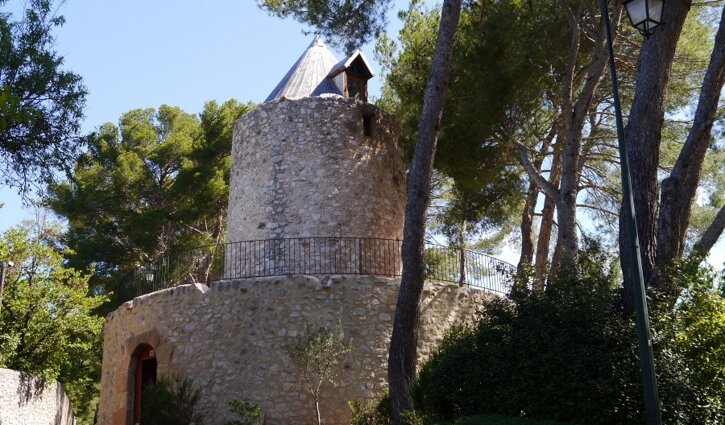 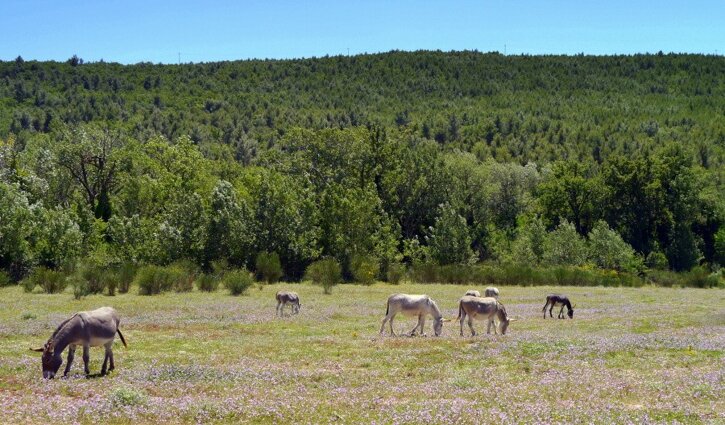 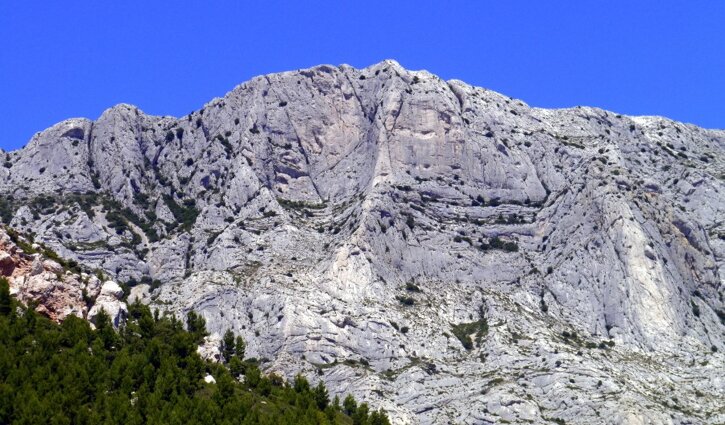 Following the Route Cézanne around the puissant Sainte Victoire

Tour of the Mont Sainte-Victoire

Touring the Mont Sainte Victoire is a perfect escape from Aix-en-Provence to see a wild side of Provence, share some of Cesanne's views and taste some fine wines en route.