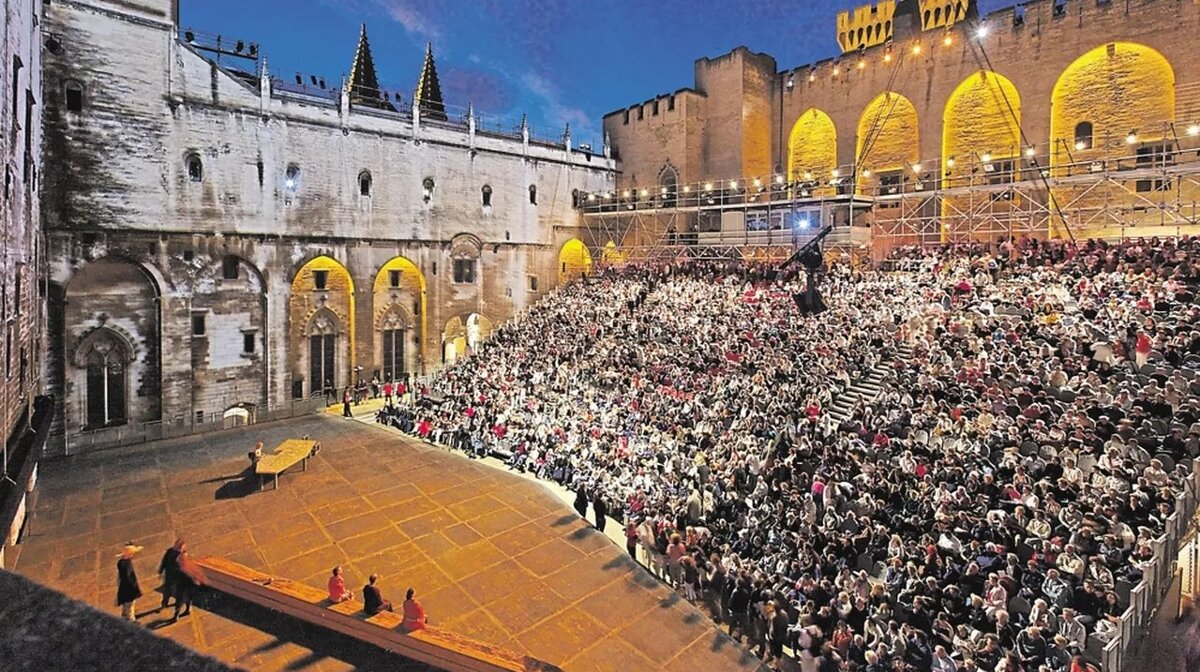 The Avignon Festival is one of the biggest performing arts festivals in the world, with both an 'official' festival and a 'fringe'.

Making full use of Avignon's wonderful architecture, many of the festival events are held in the enormous public space in front of the Palais du Papes where over 2,000 spectators can enjoy street theatre and concerts at all times of the day and night.

A fine selection of theatre, dance and music in more formal settings are also part of the festival - be sure to book your accommodation well in advance.

The full programme for the Avignon Festival tends to be released towards the end of March and can be found via the website link on this page.

This festival is hosted annually in Avignon during the busy summer month of July.

Alongside the official festival, (the "In" one), a number of shows are presented in Avignon at the same time of the year and are known as the "Off".

The "In" festival is organised by a non-profit organisation (since 1980), which is administered by a board of trustees composed of: the French state, the city of Avignon, the Département of Vaucluse, the Région Provence-Alpes-Côte d'Azur, and seven public figures competent in the field of theatre. One of the main venues is the "Cour d'Honneur" in the Palais des Papes.

The "Off" festival is also organised by a non-profit organisation, composed mostly of theatre companies and holds performances in theatre schools, on the streets and all/any places suitable for performing.

Founded in September 1947, this performing arts festival is considered the oldest and most famous in France. An initiative to revive the city following the bombings of 1944, a 'week of art' is created (at first begrudgingly) by Jean Vilar, actor, director and theatre director, to be held in the Court of Honour of the Popes' Palace. There are 4,800 spectators, who attend to see seven performances of the 'three creations': The Tragedy of King Richard II by William Shakespeare, La Terrasse de Midi (a little known French play) by a then-unknown Maurice Clavel, and The Story of Tobie and Sara by Paul Claudel.

Buoyed by the success of the first year, the festival returns the following year, and afterwards Vilar attaches a troupe of actors to the festival to come together every year to perform for an increasingly loyal and large audience.

It is during the sixties that the festival goes international when nations outside of France come to present their productions to the audiences. When Vilar was appointed as head of the TNP (Théâtre National Populaire) in France, many shows from here fed the festival program until 1963 when Vilar was replaced. He continued to run the Festival d'Avignon until his death in 1971.

As the festival grew in success and stature, it became a reflection of the transformation of theatre in France, and in 1966 an "Off" festival is created, unofficial and independent. It remained so, until in 1982 it also became institutionalised by setting up an association for the coordination and publications of the large number of 'off' shows.

Since its inception the festival has changed a great deal. It was originally on for one week and now takes place every summer for three to four weeks. The festival has spread its performance venues from the mythical Popes' Palace to around 20 sites especially kitted out for the occasion. It has grown from a festival of theatrical concentration to embracing contemporary dance, mime, puppets, musical theatre, street art and more. As a festival conceived to showcase the best of French theatre, it now shows an increasing number of works from international non-French companies.

To this day it remains an unmissable event for an entire profession. Its most recent director, Olivier Py, has been at the helm since 2014, and the 2022 festival will be his last. The Portuguese director and playwright, Tiago Rodrigues, has been appointed as its new director, to succeed Py from 2023 for a period of four years.

The festival continues to attract praise and criticism from both in and outside of France for its aims and ambitions. Always seen as a place of free speech, it will continue to encourage ideas and exchanges from artists, thinkers, journalists, politicians and everyone besides.