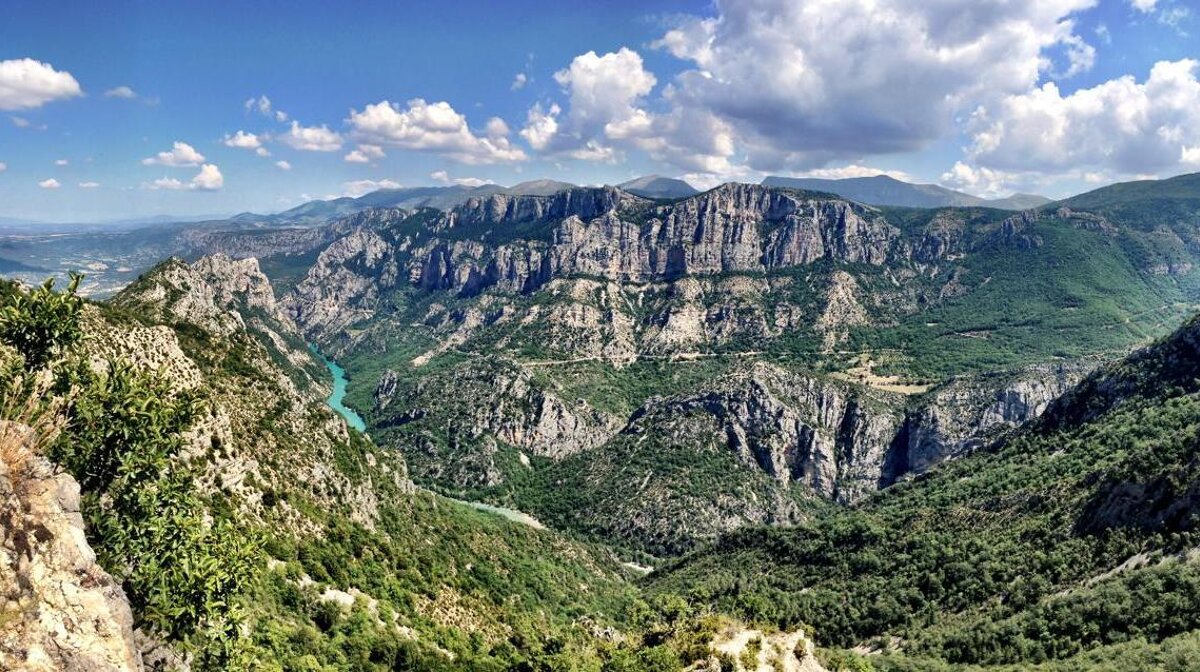 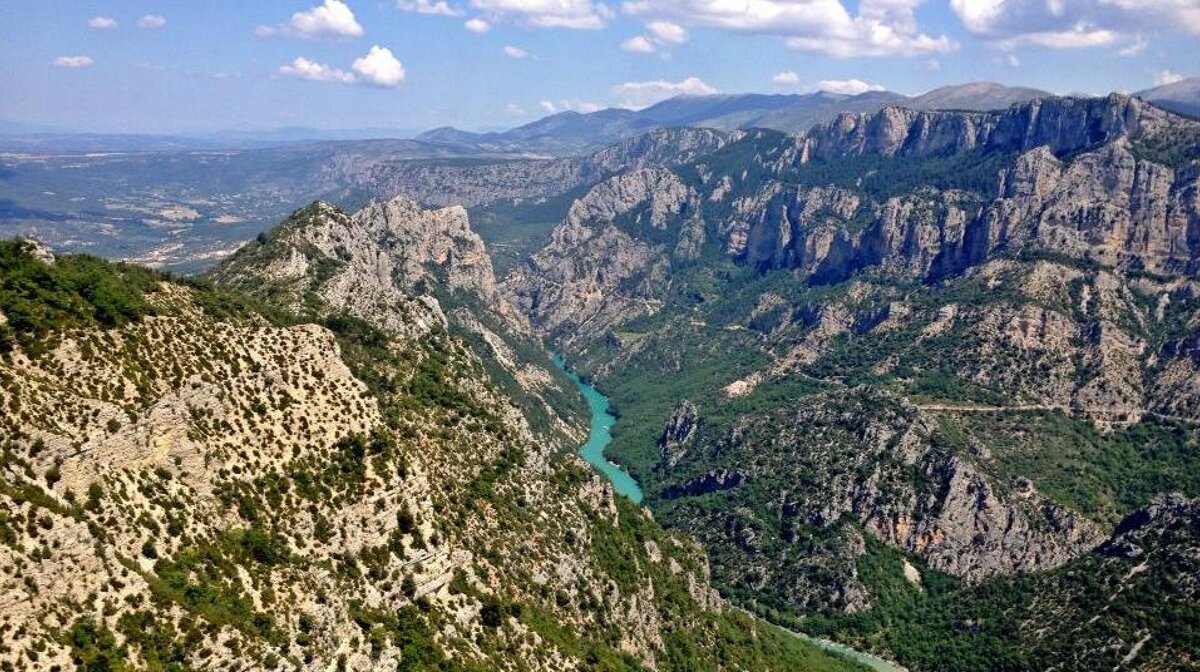 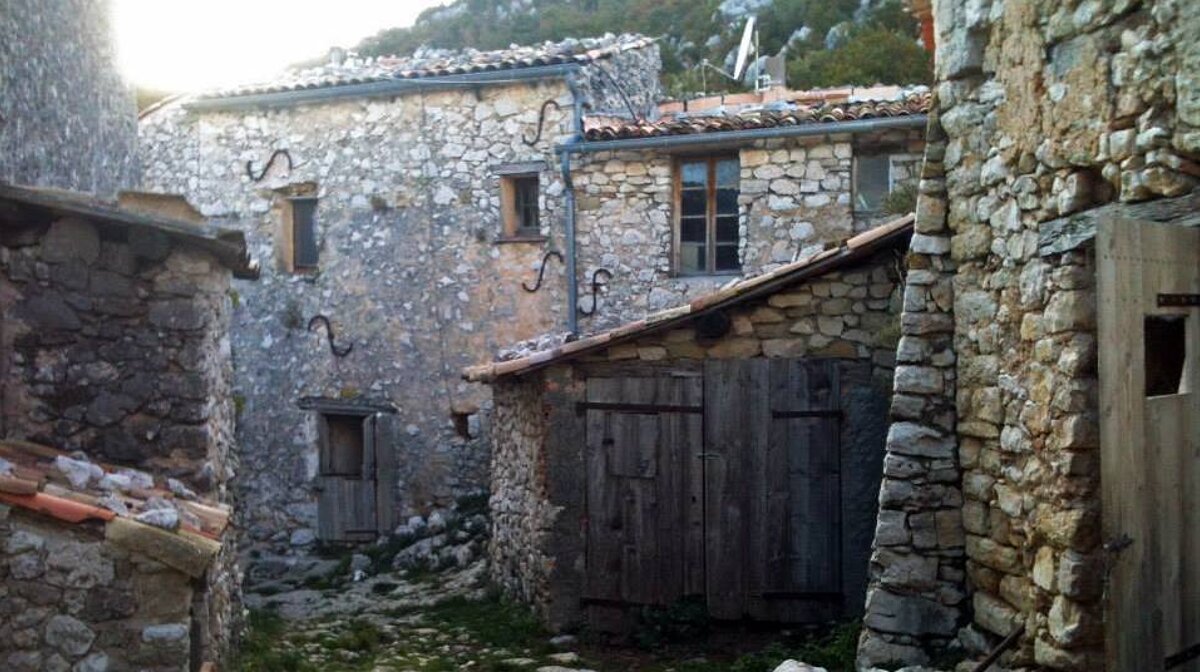 The French Grand Canyon, the Grand Canyon of Verdon, the Gorges du Verdon, by whatever name this natural phenomenon is referred to it will remain to the beholder as one of the most spectacular sites in Europe.

Not as "Grand" as its namesake in Arizona, this canyon is accessible, still wild, dramatic in its colour schemes, inviting to active hikers or wild-water rafters, canoeists or rappellers. But motorists will equally be awed by the numerous vistas along the roads to the south or north of the canyon.

For ages the Verdon river has sliced through the limestone mountains, at a lesser force nowadays than tens of thousands of years ago. The steep crevice with a drop of 800m runs from Castellane to end in the man-made Lac Ste Croix to the west, in between the department of the Var and that of the Alpes-de-Haute-Provence (see map), a route of 21 km.

By car, you can follow two routes: one -- D 952 along the north bank (Rive Droite or sometimes indicated as Rive Nord), one along the south bank - D71 (Rive Gauche), as if we're in Paris...

In general, the southern route is considered to be the one with the best views, but the northern route has the spectacular loop of the Route de Crêtes where you find the most vertical cliffs and daredevils without a hint of vertigo. The northern route also gives you the opportunity to buy the best bread in France, if not the world, just before Rougon (when driving from the east). A sign will point out an outdoor café, a baker and a watermill that accounts for the local flour. There's just one kind of bread, in one large size (can be cut in half).

No matter which route you choose, you may be tempted to view this canyon from a lower point. Until the end of the 19th Century the canyon itself had never been explored, not even by local people. It was considered highly dangerous, inaccessible, either to descend to or access by the Verdon wild waters from an earlier point. Finally, in 1905 a trio of explorers attempted to follow the river with sailboats (rafting was not known in those days) and encountered many disasters. The next year they tried again and were more successful, managing to do the 21 km stretch in three days!

Today the active, fit and experienced person can explore the canyon other than by car. There are marked hiking trails, wild-water rafting tours, rappelling or paragliding clubs. For more contacts look at the end of this page.

At the end of your trip (assuming you take the preferred east-west route) you will arrive at Lac de Ste. Croix, a huge man-made lake created by EDF (France's Electricity Co.). From there you can spend your time on the beach, swim in the soft water of the lake (bring plastic sandals, because the bottom is very muddy and rocky), rent a roundabout with electric outboard (no diesel or gasoline engines allowed), canoes, kayaks or pedal boats.

From the lake you enter the calmer end of the canyon, admire the waterfalls, the dramatic crevices in the limestone rocks, the occasional divers à la Acapulco from the top of the cliffs.

Please note, hiking in the Gorges is not for the casual walker. One has to be fit, equipped with good hiking boots, a (working!) flashlight, and plenty of water. Every year there are serious accidents, some fatal, on the hiking trails in the Gorges du Verdon.