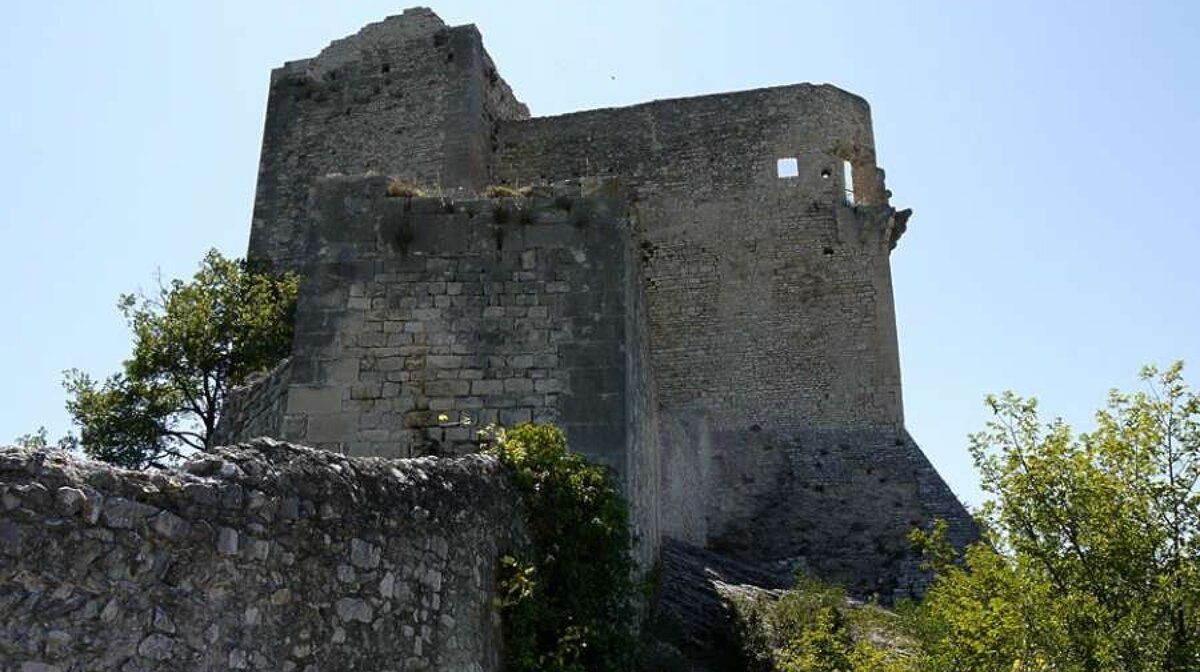 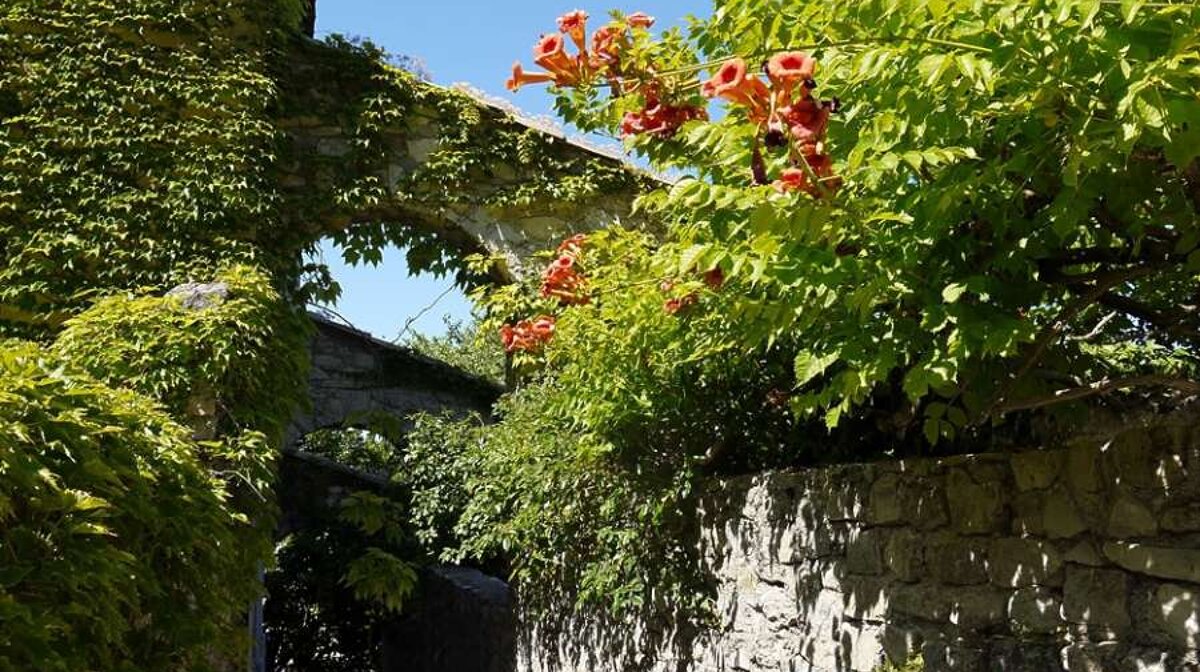 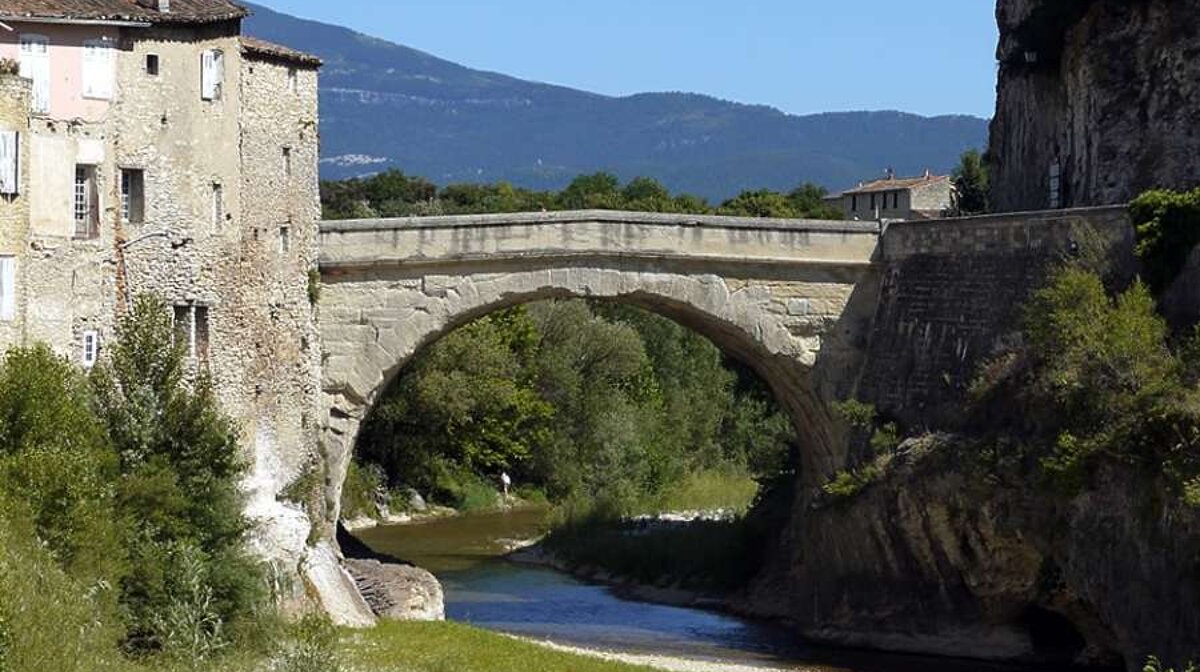 Vaison la Romaine has it all, Roman ruins, a historic & delightful medieval town centre, a castle on a rock, arts festivals, wonderful vineyards and glorious countryside for hiking and biking.

The town is neatly split in to two by the Ouveze River, with the medieval town on one side snaking up the hill to the castle, and the Roman-Gallo and today's modern town on the other.

You can feel like you've stepped back in time when you visit Vaison la Romaine. As the name suggests, this was an important town for the Romans, who liked its location and climate, and built many rather magnificent structures. Vaison became a federated city under the Romans which explains why so many public buildings were constructed.

The most obvious Roman heritage is the Roman bridge (one of only five still standing in Provence), but there are two important excavation sites right in the centre of town - the Site de la Villasse is the biggest archaeological site in France that's open to the public. You can discover the remenants of Roman villas and wander around their extensive gardens. Just to the north of this site lies the Site de Puymin which includes the grand Antique Theatre (and hosts events during the summer). Some of the ancient Roman artifacts have been collected and are on display in the Musee Theo Desplans.

Across the Roman bridge that straddles the river L'Ouveze sits the medieval town. Thanks to the conflicts between the Counts of Toulouse at this time, a castle was built at the top of the hill in the 13th century, and shortly afterwards, the villagers moved to the relative safety beneath its walls. This is where the majority of Vaison's residents stayed until the 19th century when the industrial revolution lead to a resettlement of the lands below the castle.

The Medieval town holds lots of treasures. You enter through a 14th century fortified gate with it's belfry tower, which used to have a portcullis and drawbridge. As you wander, you'll come across 16th century doorways, many fine mansions, fountains and tiny alleys and stairways. The site covers three acres so there is plenty to explore! The reasonably central square Place d'Orme is where you'll find the Chapelle St Constance and just beyond is the church which was built in the 15th century. It is currently being restored and once unveiled again to the public, will show off ts Jesuit style facade, Medieval decorations and tower. There are also wonderful views to be enjoyed here.

The castle at the top of the hill is not open to the public but you can get up close to the exterior and inspect the stone work and exceptionally thick walls. The gatehouse, watch tower and fortified gateway were added in the 15th century and confirm the castles use as a military fortress. The castle was abandoned in 1791 when it was acquired by the community.

The Cathedral Notre Dame de Nazareth lies just on the other side of the river from the Medieval town. The church was first built in the 11th century and is an example of Romanesque architecture. There is a lovely cloister attached which has a small garden and a mixture of arches and columns with some fine stone carvings. The Chapel St Quenin a few streets further into the town is another Romanesque structure, built in the12th century. It is classified as a Historic Monument thanks to its murals, decorative freizes and Corinthian columns.

Vaison has much to offer the visitor - in addition to all the Roman sites and the medieval village, there are plenty of gift shops and pretty cafes to while the day away. Make sure you allow time to explore this wonderful town, both north and south of the river. You can easily spend a couple of hours wandering the little lanes of the Medieval town and exploring the art galleries of this picture-postcard ancient village.

Vineyards fill the land and flourish on the hillsides that lead up to Mont Ventoux - the wine produced belongs to AOC Cotes du Rhone and AOC Cotes du Ventoux. Full bodied red wine forms teh bulk of the wine produced, and features the Grenache, Syrah and Mourvedre grapes. Rose wine is also produced in the vineyards. The area is filled with small producers rather than a major Domaine, so there are a couple of co-operatives that blend the grapes to produce the annual vintage.

The town plays host to a thriving (and huge - 450 stall holders!) market on Tuesdays (plus Thursday & Saturday in summer) which reflects the amount of produce that can be grown in the surrounding area. Truffles, fruits,  herbs, and honey are all produced in abundance. A flea market (Brocante) is held on the third Sunday of the month from 8.00am to 7.00pm in Place Montfort.

The town also hosts a modern dance festival Vaison Danses in July, and a Blues and Jazz festival in August. The Rencontres Gourmandes is a food festoval held at the end of October.

Things to Do in Vaison la Romaine

The surrounding countryside is filled with opportunities for cyclists, ask at the tourist office for maps for both mountain biking trails and road cycling circuits. Mont Ventoux is close by and those who follow the Tour de France may wish to test themselves up this infamous 1,912 metre mountain.

There are plenty of walking trails in the wooded hillsides of Ventoux for hikers. Other trails include the Grand Randonee GR4 route which will take you to Roaix or Malaucene. You can also walk to Gigondas (around 4 miles) or Beaumes de Venise (around 6 miles) along paths that run off the GR4.

Horse riding for all abilities can both be enjoyed year round. Rock climbing is very popular in the Dentelles de Montmirail, the area offers limestone cliffs with bolted routes and there is a school for beginners.

Surprisingly, for a town with so much to offer, there are no characterful hotels in Vaison. There are a couple of basic B&B's and dated hotels but for something a bit more special, you will have to look further afield. Just to the south are a couple of charming B&Bs, Le Mas d'Helene in Crestet has 12 bedrooms with views over to Mont Ventoux, and La Bastide des Gramuses is a Provencal style B&B in Entrechaux. Aube Safran is a B&B just outside Malaucene, it has several sweet rooms decorated in a neutral Provencal fashion, and a nice swimming pool.

A bit further to the north in Nyons is the lovely Une Autre Maison, a stylish B&B with 10 bedrooms. Hotel Crillon le Brave is a fabulous luxury hotel in a small hamlet with 32 contemporary styled bedrooms and gorgeous gardens and pool. It's about 14 miles to the south of Vaison la Romaine. Le Clos Saint Saourde is a wonderful B&B built into the cliffs in Beaume de Venise, also around 14 miles south of Vaison. Chateau Juvenal is a B&B with well proportioned rooms in a 19th century mansion. The owners are lovingly restoring the house and the grounds which includes a vineyard and olive groves. Some of the rooms are rather old-fashioned but the hospitality is second to none and the rooms are well priced.