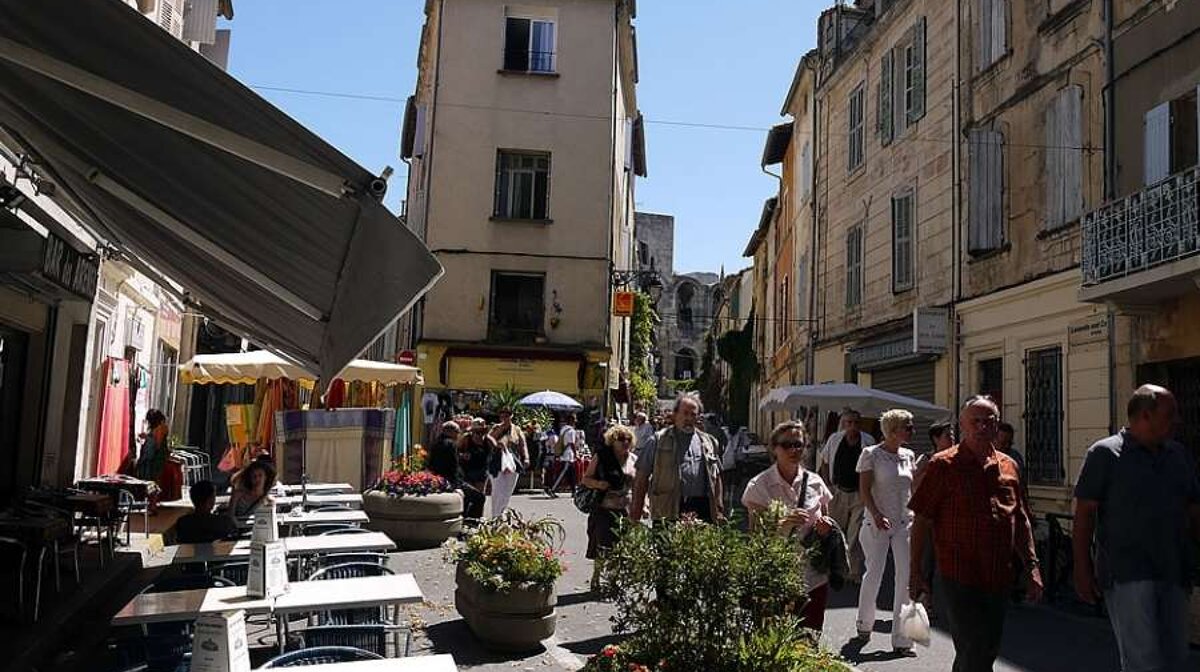 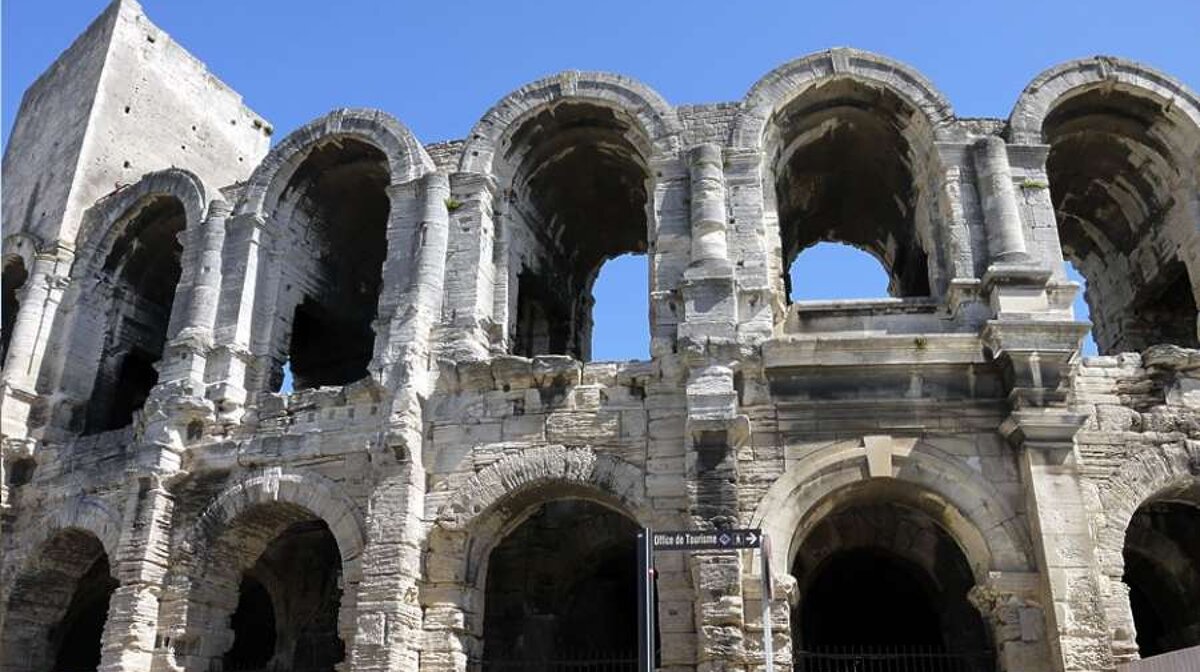 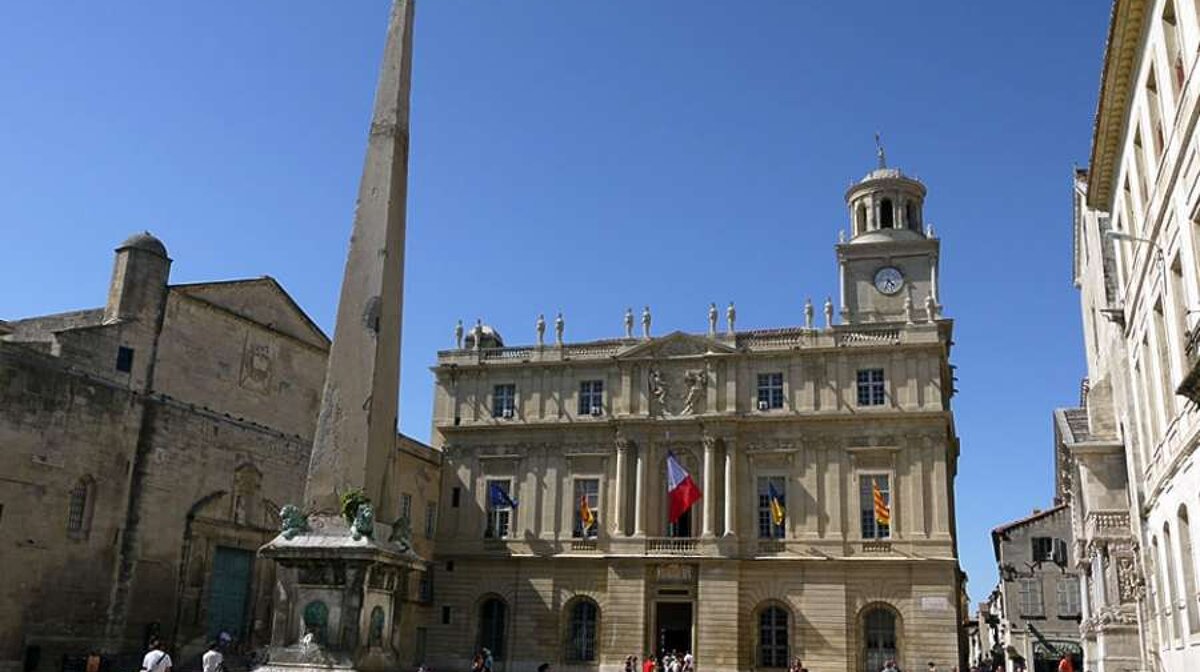 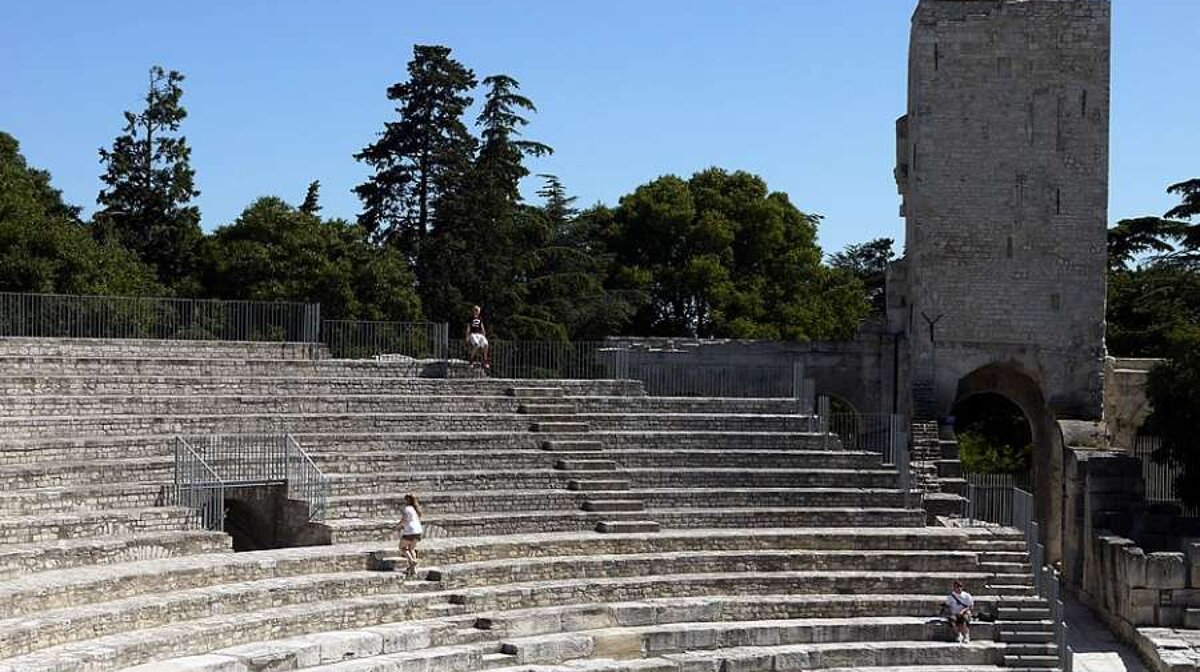 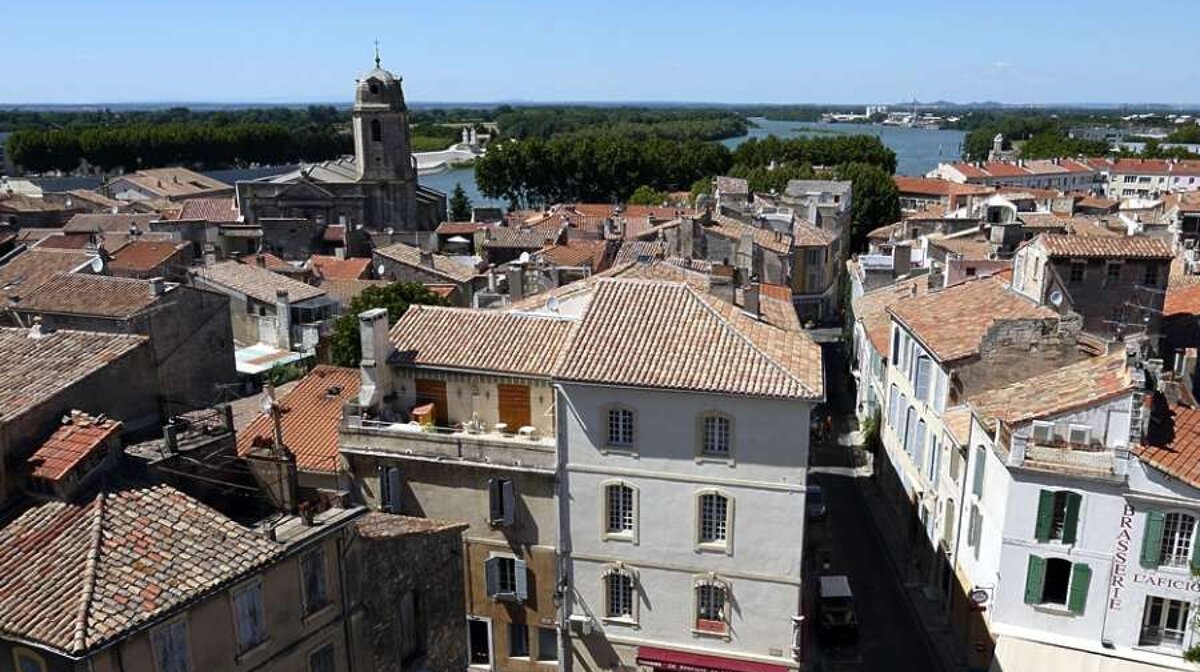 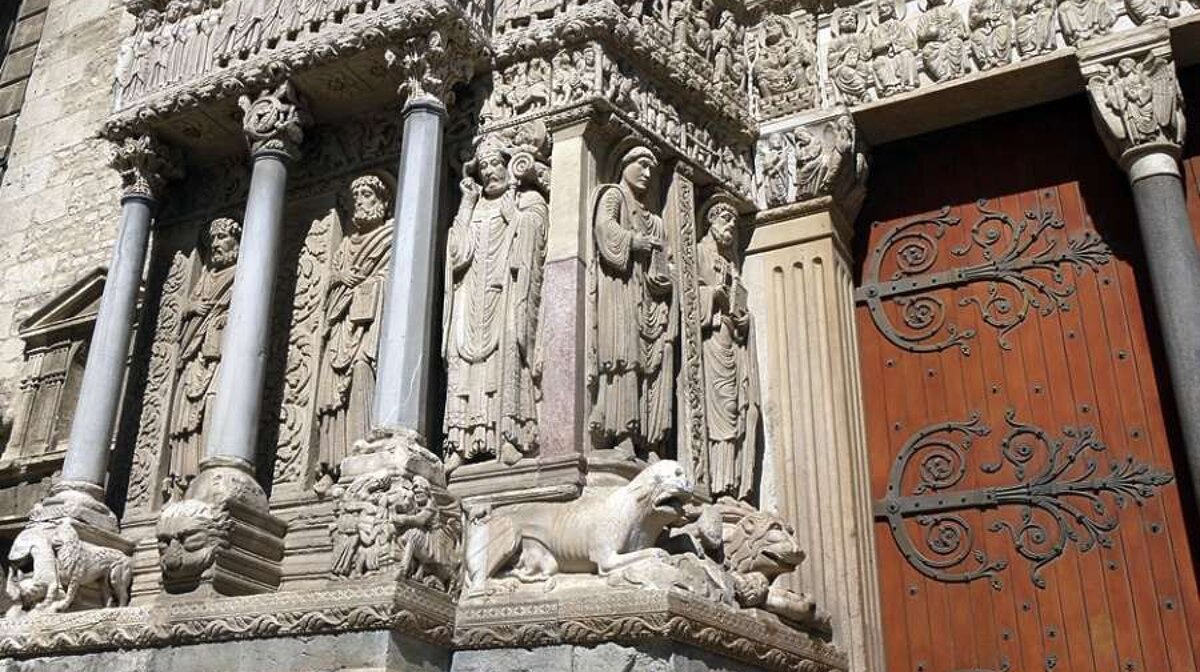 The seating inside the Roman Theatre in Arles, Provence

Arles and the river Rhone, Provence

Statues on the cathedral in Arles, Provence

Arles is the 'third city' in the département of the Bouches-du-Rhône. Compared to its boisterous, historical rival Marseille and its worldly sister Aix-en-Provence, it can be quite sedate, though summer visitors might disagree.

True, modern Arles has its festivals, its markets, its bullfights, its International Photography Show, and a seasonal stream of tourists, but it always seems to be looking over its shoulder to the past. And a rich past it is.

In the 6th century BC, the Greeks colonized the region, but those remnants are only visible in the Musée de l'Arles antique. What is more than visible out in the open is the Arena, an imposing structure of the days when Arles was a Roman colony.

Under the Roman thumb, Arles thrived and surpassed its rival Marseille. Its glory started in the 1st century BC and lasted until the 5th. The town was a hub in the interconnecting land and water ways, a port of importance (then the sea came much closer than it does now) and a center of Provençal culture.

After the fall of the Roman empire, Arles languished and declined. The Roman structures fell into disarray, their stones used for Christian churches and monasteries. Today, the Arenes d'Arles stands up proudly, but the theatre is more of a ruin: only two columns remain erect and are known as the Widows. Both are still used today for festivals and concerts.

In the 12th century Arles had a strong revival, magnificently shown by the church of St Trophime. Its portal is rich in splendid carvings. Inside, the cloisters are of a quiet elegance. To our surprise, one of the chapels displayed an array of relics of minor saints.

When you visit Arles today, you will no doubt pass the Roman structures, admire St. Trophime's portal, perhaps amble along the Allée des Sarcophages in Les Alyscamps, the famous necropolis in Arles. But  there's one element of Arles' history that will follow you everywhere on your visit. It's in every kiosk or gift shop, on postcards and t-shirts, on book covers and towels: Vincent van Gogh, the Dutch painter who spent just fifteen, dramatic, months in this town. Read more about van Gogh in Arles.

Arles was probably first settled by Ligurian tribes and the Celts before the Romans came and conquered all. Located as it is between Italy and Spain, Arles became an important strategic centre for the Romans. Many Roman monuments were built, Roman Emperors were stationed here during times of conflict and campaigns, and Roman officers were rewarded with estates here for their retirement.

After the Romans left in the 5th century, Arles became victim to skirmishes and Saracen invasions, plagues and disease. It wasn't until the 10th century that peaceful times returned and the town could expand. The Christians arived in the 12th century and began to build their monuments and cathedrals, and Arles thrived, drawing in educated and wealthy men of influence.

By the 16th century, the aristocracy were building grand mansions in the city centre, and traders and artisans were creating their own communities. More classical architecture was being created, in particular around the Place de la Republique. However, when the Industrial Revolution came along, Arles missed out on the creation of railroads and became less important than it's surrounding rivals Marseille and Avignon.

At the end of the 19th century, Arles was drawing artists to itself who appreciated the old fashioned Provencal charm the town offered. During the 20th century some contemporary architecture has been added to Arles, such as the Joseph Imbert Hospital (designed by Paul Nelson).

Arles is one of the most popular tourist destinations in France, let alone Provence. And with good reason, both the town and the surrounding area are packed with things to do.

Let's start in the town. It is best known for it's impressive Roman ruins, and for it's association with the artist Vincent Van Gogh. The focus of the town is the Roman Arena (amphitheatre), a glorious reminder of the Roman Empire from ancient times. Next to it is the not-so-well preserved Roman Theatre, but is still rather marvellous. The main square, Place de la Republique is home to the ornate town hall (it's the one with the bell clock tower) and the Romanesque Cathedral St Trophime. The cathedral dates back to the 10th century and the interior is beautifully decorated. The cloisters feature galleries and a pretty courtyard. Also in the Place de la Republique is the eye-catching 4th century 10 metre obelisk and surrounding fountains.

If you are keen on sightseeing, you might be best buying a special pass which provides access to either a selection of sites (the Freedom Pass, valid for one month) or all of  the sites and museums (Advantage Pass, valid for one year). Ask at the tourist office.

Vincent Van Gogh stayed in Arles for only 15 months but still managed to paint over 300 works. You can follow a Van Gogh trail around Arles (map available from the tourist office) which will take you past places where he used to paint, have a drink, observe life. Sadly there is no art gallery with Van Gogh paintings in Arles - all his paintings are distributed amongst the more famous galleries throughout the world. However, there is a Vincent Van Gogh Foundation (to open summer 2013) which aims to share its passion for the artist and for contemporary art influenced by Van Gogh.

Arles is blessed with plenty of museums and galleries. The Musee departmental Arles Antiques is the place to view all of Arles ancient artefacts - statues and other Roman objects, mosaics and sarcophagi are just some of items to see. The Musee Reattu in housed int he old Grand Priory of the order of Malta and displays fine arts, sculpture and photography. They were also gifted 57 drawings by Picasso by the artist himself who was a avid fan of the town. The ethnological museum, Museon Arlaten features exhibits of local culture with examples of clothing, tools, furniture and books.

Shopping is pretty much limited to souvenirs but there is a thriving art scene, with many private art galleries, some of whom feature contemporary art exhibitions throughout the year. The main market in Arles is held on Saturday mornings and is a big affair covering two kilometres. You'll find plenty of fresh local produce, clothing & shoes and arts & crafts. A smaller market is held on Wednesday mornings on Boulevard Emile Combes. On the first Wednesday of every month you'll find an antiques fair and flea market.

Numerous events, festival and exhibitions take place in Arles throughout the year. Take a look at our calendar for the latest dates and what's on.

Things to Do in Arles

The surrounding countryside of Arles includes the Carmargue and the Alpilles. The Carmargue is famed for its marshlands, black bulls, white horses and flamingos. It's a Regional Nature Park spread over 100,000 hectares and contains a bird sanctuary, hiking trails and cycle paths. The Alpilles lie to the east of Arles and is home to limestone hills, olive groves and vineyards. You will find beautiful villages here - try Les Baux and St Remy de Provence. One of France's 'Grand Route de Randonnee' runs along the Alpilles - look out for GR6.

You get the whole ranges of eateries in Arles - from casual pavement cafes to elegant Michelin starred restaurants. One of the best restaurants in town is L'Atelier de Jean-Luc Rabanel - Michelin starred, original, with modern cuisine and surroundings. Cuisine de Comptoir is the place to go for open sandwiches and soups - it's on Rue de la Liberte (closed on Sundays). A more sophisticated bistro is Le Cilantro - think Provencal cuisine with international influences. It's on Rue Porte de Laure.

Despite Arles having the outward appearance of an olde worlde town, there are a couple of really nice, modern boutique hotels. The stylish Hotel Particulier is dressed in chic white with modern interiors that retain original features of the 18th century mansion house. For something more traditional, the Nord-Pinus is where the artists and writers of the early 20th century stayed. Both hotels are in the centre of town.